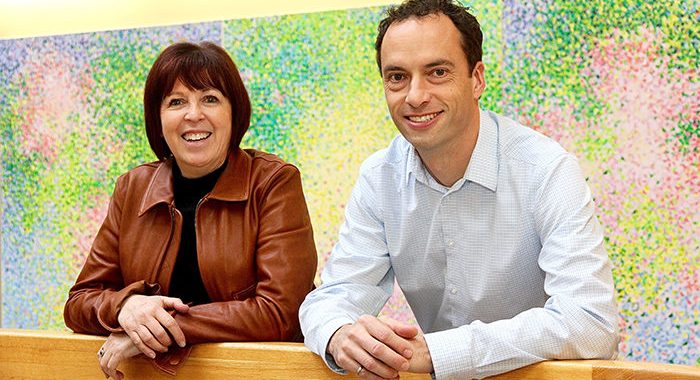 Since graduate school, Eva Turley has been interested in how and why cells move in our bodies. This curiosity led to her discovering, characterizing and cloning RHAMM, a protein that regulates cell movement and stem cell differentiation, during the early 1980s.

Fast forward to the present day.

The Western Oncology, Biochemistry and Surgery professor, along with Chemistry and Oncology professor Len Luyt, has determined that blocking RHAMM provides the safest and most effective means to, among other things, selectively stimulate fat growth under the skin, moderate inflammation and reduce scarring by controlling the body’s own natural regenerative processes. This is good news for millions of patients, ranging from premature babies to breast cancer survivors.

The Lawson Health Research Institute scientists are co-winners of the second-annual WORLDiscoveries Vanguard Innovator(s) of the Year award for their work with Novare Pharmaceuticals. That work continues to advance RHAMM-based technologies to find treatments for a variety of inflammatory conditions, including bronchopulmonary dysplasia in premature infants, arthritis and emphysema.

“For instance, patients with lung fibrosis, or emphysema, cannot breathe. There is no treatment for it and eventually, patients die. So, we think this would help in reducing the fibrosis. It’s surprising how big a 15 per cent difference can make for a patient,” said Turley, adding potential benefits for premature infants is also relevant in her work.

“Some premature babies are so young that they need to be on a ventilator because the lungs are not developed. The babies cannot expand them to breathe. When put on a ventilator, they get inflammation of the lungs that, down the road, can create a lot of problems. We can blunt the inflammation that results from the ventilators.”

Turley added the breakthrough in tissue engineering and disease control also holds the promise of regeneration and reconstruction of women’s breasts by localized stimulation of the body’s own adipocyte stem cells after a mastectomy. Scarless healing for post-surgical wounds, as well as the reduction, or even elimination, of excess scarring is also a possibility.

Turley’s work has prospered from a longstanding collaboration with Luyt, an expert in developing compounds that target RHAMM. The creation of Novare, founded on Turley’s work, opened a research and validation centre within the London Regional Cancer Program two years ago to further tap into the duo’s expertise and develop RHAMM-based treatments for various diseases.

Luyt, who serves as lead scientist at Novare, directs his team as they design and characterize hundreds of novel, proprietary peptides that form the basis of the company’s drug-development pipeline. These peptides are subsequently screened in Turley’s lab for therapeutic potential for cartilage development, inflammation and tissue scarring.

“The realization this had great potential for therapeutic targeting was a real eye-opener,” Luyt said. “Since we’ve become involved, and the funding has really come into focus on drug development in the last two years, we have made some great progress to where we are looking at pre-clinical studies to see how these behave in living organisms.

“I’m excited. When you discover a fundamental science and you, as a team, are taking them through to possible application, it’s very exciting to see that whole pathway. It’s not something that happens often in academics. That is a great thing about this project.”

Turley added she would also like to bring her research back to her initial interest – cancer – for the diagnosis, prognosis and course of treatment for several types, including lung, breast, prostate and brain.

“The part of this for me is the curiosity. It’s a trip to be able to figure out what’s going on. It’s fun to work with so many other people in other areas. To see it through, and for it to have some benefit, is extremely satisfying,” she said.

Photo: Western Oncology, Biochemistry and Surgery professor Eva Turley, left, and Chemistry and Oncology professor Len Luyt have received the 2016 WORLDiscoveries Vanguard Award for Innovator(s) of the Year for their work with the RHAMM protein in finding treatments for a variety of inflammatory conditions including bronchopulmonary dysplasia in premature infants, arthritis and emphysema.

AND THE WINNERS ARE …