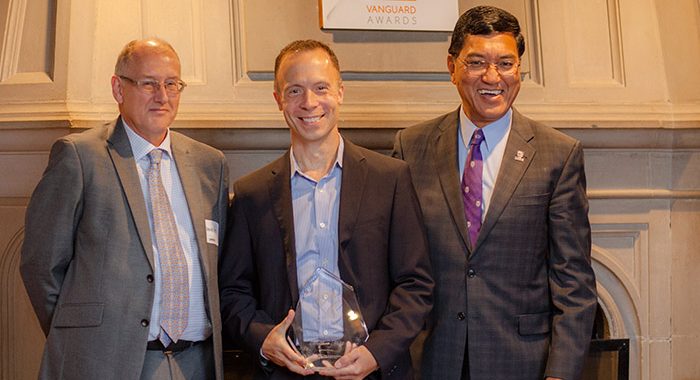 Dr. Matthew Hebb Awarded As Innovator Of The Year

WORLDiscoveries® is the technology transfer and business development office for Lawson, Western University and Robarts Research Institute. The Vanguard Awards recognize researchers from all three organizations who, in partnership with WORLDiscoveries®, have achieved market-readiness milestones over the past fiscal year.

“Lawson scientists undertake more than 500 new clinical trials and partner on over 600 research projects annually. But to make an impact on patient care, we must partner with industry to move our innovations forward,” said Dr. David Hill, Scientific Director at Lawson. “The Vanguard Awards show the strength and potential of our research as recognized by our commercial and industry partners. I was honoured to announce Dr. Matthew Hebb as this year’s Innovator of the Year.”

The Innovator of the Year award is given to individuals who demonstrate excellence in innovation within their field. The award highlights achievements of personnel who contribute to a culture of commercialization and entrepreneurship by creating a product or service that is beneficial to society. Dr. Hebb, a Lawson scientist, neurosurgeon at London Health Sciences Centre (LHSC) and assistant professor of neurosurgery at Western University’s Schulich School of Medicine &Dentistry, was recognized for the development of two innovations that offer hope in treating two deadly diseases – Parkinson’s disease and glioblastoma.

In the first innovation, Dr. Hebb is creating tools to advance Parkinson’s disease research and therapeutics across the globe. Parkinson’s disease is characterized by progressive neurological impairment caused by the death of cells in the nervous system.

In his second breakthrough, Dr. Hebb is addressing the most common and aggressive cancer arising from the adult brain – glioblastoma.

Current glioblastoma treatment options are limited. Even with treatment, survival is typically extended to only 12 to 15 months after diagnosis. Dr. Hebb and his team hope to improve patient outcomes through the development of a new treatment called Intratumoral Modulation Therapy (IMT).

IMT works by placing electrodes in multiple locations within a tumour or within the area where a tumour has been removed. The electrodes deliver therapeutic electrical stimulation that disrupts a tumour cell’s ability to divide and resist other therapies, which results in the tumour cell’s death.

Dr. Hebb first published this work in 2016 and filed a patent titled “Intratumoral Modulation Therapy”. There has been considerable interest in his work from leaders in the biotechnology industry as it addresses a critical need and has high application potential. Currently, he is pursuing the development of special-purpose bioelectrodes that will optimize the therapeutic response in the most common clinical scenarios encountered with glioblastoma.

In addition to Dr. Hebb’s Innovator of the Year award, Lawson scientists were recognized in the “Patent Issued Award” and “License Agreement Award” categories. Winners from Lawson include: